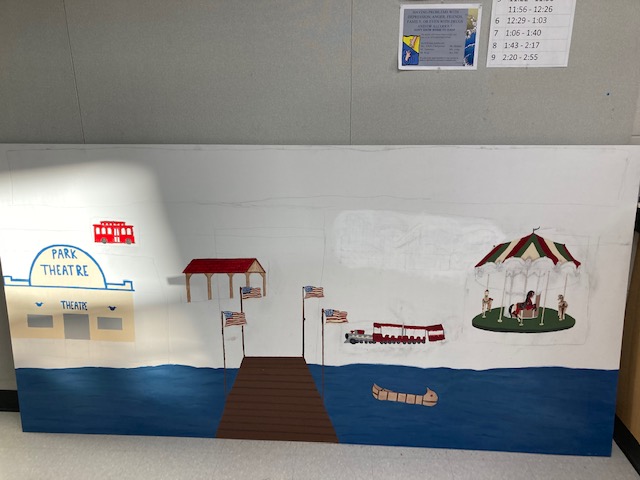 In the mid to late 1800s, Montoursville had an amusement park. It had a Ferris Wheel, a trolley, a train, even a roller coaster. In the end, the amusement park was torn down and replaced with swings, slides, baseball fields, and picnic tables.

Indian Park stands in place of that amusement park and it is a very popular place for Elementary school students or anyone who wants to be out in nature. It is very little in the way of remembrance of what it used to be, however, there was a mural of the park put on one of the new Indian Park buildings.

This mural is now in disarray and so far gone that slapping on a fresh coat of paint would not fix it. Whoever was given the project would have to redesign and repaint a whole new mural, presenting a challenge and a great opportunity.

The Burrow contacted Mrs. Vanessa Lechler, painting teacher, and asked if she or her students would be willing to make a replacement mural highlighting a piece of our town’s history.

Lechler agreed, saying later that, “it is part of the town’s history…[and it is] important to tell that story and for students to be a part of it.”

Lechler allowed her Advanced Painting students to work on the new mural last year, but their time was cut short by the pandemic and has let the National Art Honors Society members continue where they left off.

Students this year and last have been using their spare time to help make the replica and adding their own spin on the original design, making it more vibrant and detailed than before.

Lechler also said that the new mural would be better preserved by being painted on a sheet of metal, rather than the original wood and put in plexiglass to help it last for generations.